Back Off The Bike

Posted 2022-10-05 17:00:00
Well that was fun while it lasted. Unfortunately the frame of my bike has a crack in it. The lifetime Trek warranty covers such things, though, so I'll definitely be back sooner or later. The trouble is I don't really know how long it'll take to complete. In the meantime bowling has picked back up. Thanks to a friend of mine I'll be rockin' the Hammer Hy-Road X. Alas the workouts of biking aren't quite the same as bowling. In any event, if someone out there is local and wants another bowler for a sub, you just let me know. ;)

Back on the Bike 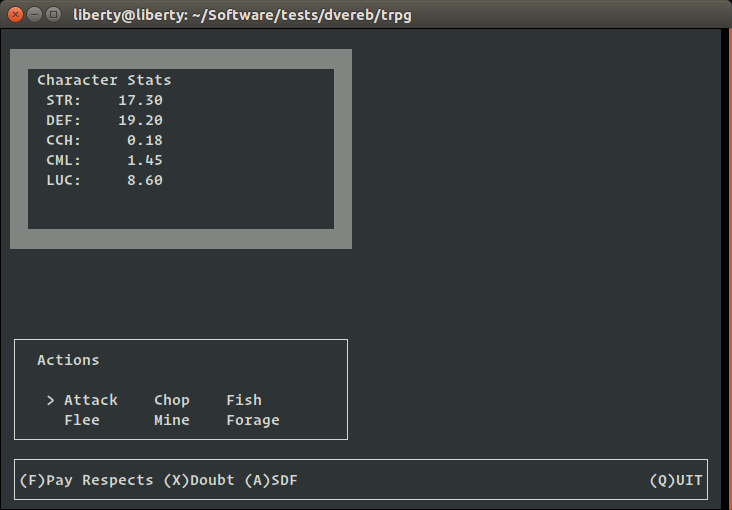 What a day it is! The first day of summer, and yet not the most important part about today. I'll save that for those in the know, though. First, lets discuss last year's post. I'm still working on my 2d graphics engine ... or should I say 2d scope creep engine. I have the graphics work completed and moved on to physics. Adding physics caused me to rethink a few parts of the graphics side, of course. I learned a new language feature along the way, though, so I'm content with the extra time. As predicted I can't keep to one game idea at a time. This is okay now, though, because I'm building each idea off of the new engine/library I've built. I'm just using different game designs to test different features as I build it out. In the end I should have enough of an engine that I can't use *NEED NEW ENGINE FEATURE* as an excuse to stop and switch to something else.

So what else is new? I went to Erie Day of Code this year. I wanted to go last year, but I didn't discover it until the day before the event. Thanks again to my job for sending my coworker and myself. There were some great speakers this year. My favorite was definitely Caleb Porzio as he presented "Writing Code That Speaks." It was full of friendly reminders on how to keep those who read your code happy. In particular, the part about bare parameters and boolean flags was something I just never thought to do. It's one of those slideshows I think I'll read once a month until the programming practices in it become a habit.

This year I've spent a little bit of time programming a 2D graphics engine. I tend to start up new project every now and again that seem to suffer from scope creep and a lack of interest. Those projects typically start out with a bit of copy and paste, so I figured this time I'd learn how to write and compile a library. Of course I've gone ahead and let a few extra ideas find their way on to my todo list, so it's now going to be multithreaded, but I'm still making progress. In the future I should have myself a nice new starting place if I decide to work on a new idea, but only if I get this to v1.0. Wish me luck, and feel free to join in to give me tips or design ideas. Just contact me via dvereb@dvereb.com, as per usual, and I'll hook you up with access to the repo.

Welcome back to the old dvereb.com layout! With my last layout I just didn't have the desire to update my website, so I figured switching back would be best. My plan is to update the online portfolio portions of the webpage with some of my more recent work. As per usual, if you notice anything wrong with the site or if you have any suggestions, please send them my way via dvereb@dvereb.com.Thanks.

I've moved to a new server! ...except that I haven't. I've simply upgraded my plan to a 1GB server rather than a mere 256MB of RAM. All this for $2/mo more due to an amazing sale going on with my server company! I highly suggest everyone check out

Anyone who knows me should know that life has been hectic. The only thing I've really had time to work on is my RPG, The Lands of Elendore. You may remember it from years ago at rpg.dvereb.com (since removed). I'm rebooting the game as a way to test out SDL. For alpha builds, see dvereb.net. If you'd like to be a part of the development of the game, whether it be in programming, art, music, map making, lore, or anything else, don't hesitate to contact me. Otherwise you can simply keep tabs on my progress and download releases as I post them.

I just had some great customer service support from steelseries. Our cats got to my new SteelSeries 7H headset. They chewed my cord up in 5 separate places. It wasn't even the extension cord. It was the mini-USB to 2 3.5mm jack cord with volume and microphone controls! After searching their website and finding nothing, I opened a support ticket. For only $5 I'll have a brand new one shipped right to my house. TALK ABOUT CHEAP. I thought they were going to charge much more than that. I actually ordered two because I figured the cats would get to them again. That way I don't have to wait a business week next time - I just open up the other one and order another backup. THANK YOU steelseries.

The portfolio section of my website has been updated to include new things I have been studying at Penn State in the past few semesters. Also, although the news is a little late, I'm getting married on 10/10/10 - exciting times!

Well the unnamed game has been stopped now as I have fixed all known bugs. I will remainwith the functionality it has unless someone gives me good reason to start it back up again. As previously stated, head on over to the directx gamespage to download it. As for other projects, I've been working a little bit here and there on other websites as well as looking into starting a few others. Hopefully I'll have more information to post next update!

I have done some work with my new unnamed game and decided it was time to release an alpha version of it on my site. Go to the directx games page to get your hands on a copy! All it includes right now is endless mode, but that is enough for me to get some enjoyment out of. Let me know what you think! Send feedback to dvereb@gmail.com. Also, if you find any bugs or have any suggestions, feel free to send me those too. Enjoy!

Everything except the forums are complete and I have officially released the new content. Check out the games section to see progress updates on all of my current projects. I will have links to each game as soon as I decide they are fun enough to play. If you notice anything that is wrong such as spelling errors or design issues, please send me an e-mail at dvereb@gmail.com!

I have updated the site to include a lot more content in fewer pages. I decided that having multiple domain names with different layouts was unnecessary. Now all of mydirectx games, website software, and other projects will be available via dvereb.com. Check back soon for further updates. I plan to have the website transition complete within about a week.

Welcome to the updated version of dvereb.com. The site is now simply an online portfolio for my computer projects. If you are looking for the forums or anything related to the old version of the site, simply contact me via dvereb@gmail.com.